Wednesday, April 23rd, Modern Domestic will be celebrating its 4th anniversary with cocktails, snacks most importantly the Swiss owner of BERNINA, Hanspeter Ueltschi will here at MD partying with us!!!

HP, as he is affectionately known, hardly needs an introduction, but for those of you who don’t know of him, he is quite the character with a larger than life personality. To put it in simplest terms, Hanspeter Ueltschi is the Mick Jagger of the sewing world. Lupine and I get to spend a week with him every summer at BERNINA University and he never fails to entertain while dining with, talking shop or cutting a rug on the dance floor. This will be his first time visiting MD and he is quite excited to visit his prized “Next Gen” dealership and meet all of YOU! 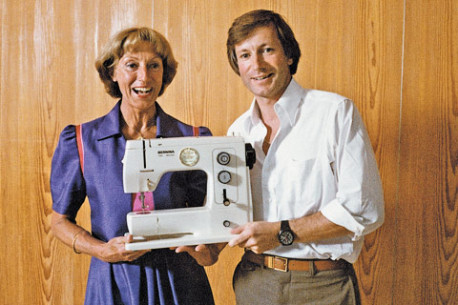 HP’s great grandfather Karl Friedrich Gegauf invented the world’s first hemstitch sewing machine in 1893 in Switzerland, starting the family-owned company. In 1932, the BERNINA brand was born when the company manufactured the first home sewing machine. Bernina is named after Biz Bernina, the highest summit in the eastern Alps. Ueltschi took over leadership from his beloved and talented mother Odette (photo above) in 1988.

So when the fourth-generation owner of Bernina visits one of his dealerships, fans of his quality machines love to bring them to be autographed. I know I will have him sign mine!

More details regarding will be announced as the the day approaches so…  SAVE THE DATE!!

2 Responses to “Save the Date!”