Until very recently, I had never sewn a quilt. I’ve done just about every other kind of sewing you could think of, but quilting never made it on my to-do list.  When I found out one of the members of my book club was pregnant with her first kid, I figured the time had come for me to finally delve into the world of quilting. I knew immediately that I wanted to use Elizabeth Hartman’s adorable Charm Squares Baby Quilt pattern for the quilt top.

The pattern was very straight forward and came together quickly, and I learned some valuable lessons along the way. For example, when quilting, pinning is your friend! I often skip pinning stuff when I sew garments and everything ends up working out just fine, but I would have been much better off if I had lined my pieces up and pinned them in place prior to sewing them.  Instead, I ended up with five rows that were five different lengths, and had to trim mercilessly to get a straight line on both edges, which meant I had to cut off some very cute pieces. In spite of all that, I think it turned out pretty great: 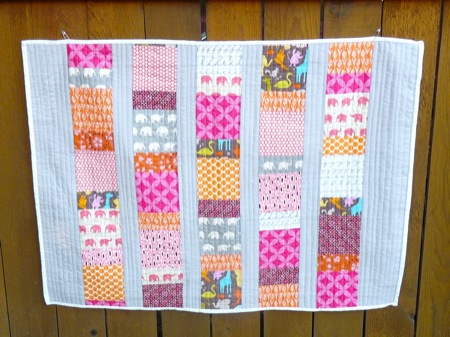 The real challenge with this quilt came into play when the other members of my book club said they wanted to be involved. I had already pieced together the world’s cutest quilt top, and was feeling very protective about my creation. Plus, with one or two exceptions, the other members of my book club are decidedly not crafty. I had nightmare visions of puffy paint and glitter, and knew I had to come up with some idea that would include everyone, but would also allow my secret control-freakery to protect my beautiful quilt.

I decided to give each book club member a pre-cut square of fabric and have them write an excerpt from their favorite children’s book with a permanent ink pen. Elizabeth recommended the Micron pen, which I found at Art Media. It comes in a wide variety of colors, but I went with basic black. These pens are great because they don’t bleed on the fabric so you get a really crisp line, and the permanent ink means that it will hold up through many future trips through the washer and dryer.

I plied everyone with wine and snacks and got them to come over for a quilt-square-making fest. I had everyone practice writing out their excerpt on a sheet of paper, and then I taped the fabric squares to the table in order to keep the fabric from shifting around and let the ladies have at it with the Micron pens. 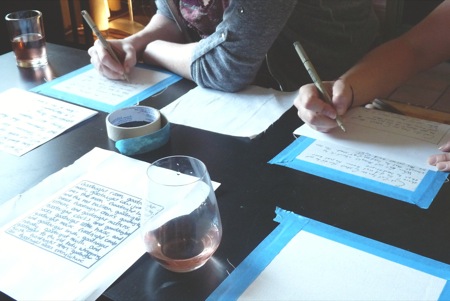 Once they were finished making their squares, I pieced everything together, made my quilt sandwich, and used the walking foot to sew it all together. I considered attempting a free-motion quilting pattern, but I thought the lines worked really well with the overall look of the quilt. Besides, it doesn’t get much easier than sewing a whole bunch of straight lines.

I am so in love with how this quilt turned out, and I was so happy to find a solution that allowed 7 very different women to leave their personal imprint on the quilt without ending up with some crazy glitter puff-paint nightmare.  We’re also going to give baby Lily a copy of each the books quoted on the quilt, so she can start life out with her own little library of beloved books from her mom’s book nerd friends. The best part of this project is that I think it has made a quilter out of me! I am already thinking about what I want to do for my next quilt, and might just throw caution to the wind and attempt a King size the next time around. 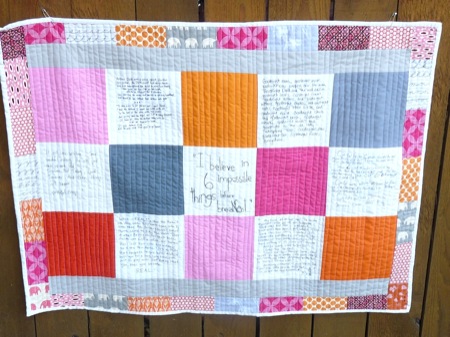 Please note, Elizabeth has added some new quilting classes for late summer/early fall. If you are ready to jump in to the fun of quilting, have a look, this very class is on the schedule, along with a few other beauties.