Every summer, BERNINA hosts a “convention” of sorts–part training session, part new product release, part networking, part fun times. BERNINA University 2012 (or as I like to call it–Camp BU) was held last week in Washington DC. Lupine, Michelle, and I trekked all the way across the country while fearless Erica stayed here holding down the fort.The East Coast was in a full-on heat wave when I arrived back in my old home of NYC. I mean, come on. If I’m going to spend 6-8 hours flying across the country, I’m stopping by my old neighborhood! I was so excited to see friends, visit museums, bookstores, & ball parks, hit a Broadway show, go to my former store, and generally see the city.

I had a lot of fun and by Friday Lupine and Michelle had joined me. We spent a day wandering around SoHo shopping and eating yummy food, paid a visit to my former home, The City Quilter, and crashed the garment district looking for zippers.

Saturday we traveled by train (how old fashioned!) to DC. Delaware! Maryland!

The first day included an open meeting where we saw new product like DesignWorks, for embellishing, and the debut of the new 7 series machines with a new bobbin system, the 9 hook.

That afternoon I sat down in front of the new 780. It was a little dreamy! Love the extended arm, bigger touch screen, large bobbin, and dual feed.

Can you imagine an entire room full of 780s? 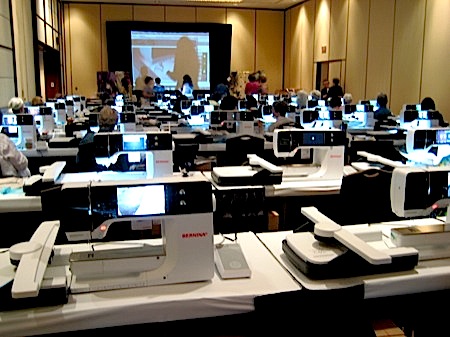 One of the many reasons I like going to BU is to try feet or accessories I haven’t worked with yet. Throughout the week, I took classes on the 830, 580, and 380.  In the 380 class, I got to try the Needle Punch Tool and Spanish Hemstitch Attachment.

One of the best parts of BU is friends! My friend from Kansas City, Jaime, and I took a few classes together. We tried not to be too distracting.

Plus, I got to see my friend and former co-worker Andrea and the 3 of us had a lot of fun getting to know a new friend, Heather from Brooklyn General.

At the end of the week, during the closing ceremony, several awards are given out. None of us were prepared to be nominated so I didn’t have my camera on me. I can only say that when I saw Michelle and Lupine’s names come up on the screen for “Rookie of the Year” nominees, I was unprepared for the amount of pride I felt for those ladies. And then to have Modern Domestic called! It was kind of amazing. We’re so lucky to have incredible customers that help make our store awesome. Quite the end our East Coast/Camp BU extravaganza!